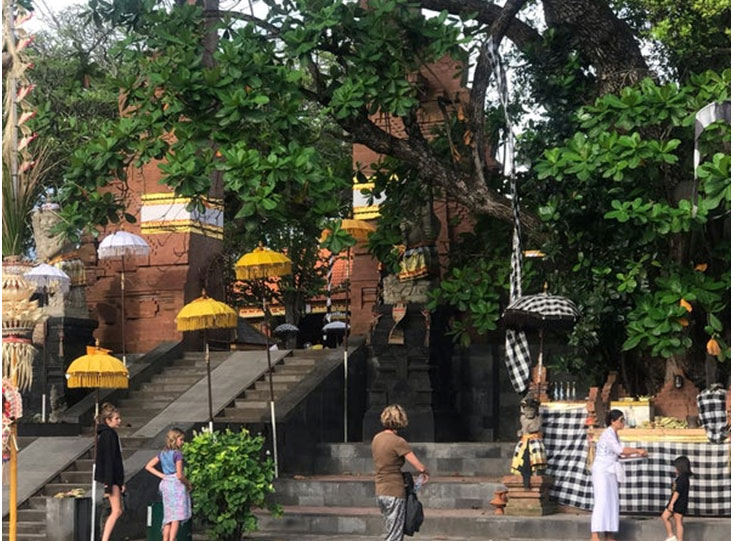 Petitenget temple was erected by the beach at the west corner of Krobokan Village. The deities sit on the shrines are believed to have protected the people living in the area of Kerobokan from an epidemic in the past.  A very long time ago, a village Priest, Pemangku, received some advices from a high Priest DangHyang Dwijendra, also known as Dahyang Nirartha, who happened to travel to the island, of how to cure the epidemic. He was the High Priest of Brahmana Caste, from one of the biggest Kingdoms in Indonesia, the Majapahit, in the 15 century. One of his advices was to build one shrine where Buto Ijo who already passed away, wanted to sit on it in his intangible realm. Buto Ijo was previously the ruler who owned the territory of Kerobokan area at that particular time. He was one of the deities then. Buto Ijo was known as a huge figure with green color. If there is a Kerobokan festival held, this figure is presented in an effigy with green color, to show the remembrance and respect of his protecting people living in the area of Kerobokan from any harming energy.   The area was used to being a dense jungle. The place was known as ‘tenget’ charged of spiritual energy. It was known to scare people who passed through the area.

Ongoing saga, beforehand the high Priest of Danghyang Dwijendra left a wooden box to Buto Ijo when travelling to Kerobokan area and asked him to keep it when they met there. None dared enough to open the box to get to know what was in it. For the reason of it was owned by a high Priest, it had to be something spiritually powerful. The Priest had never returned to ask for the box since then because he continued his traveling around the island to meditate at every single corner considered to have a powerful spiritual energy. The wooden box referred to ‘peti’. These two weird things then formed the word of ‘ Petitenget’. Now the area has become so popular as a tourist destination where the myths and the reality collide. It has a beautiful white sandy beach and wonderful sunset to witness at twilight. The temple remains one of the temples people prospering from the tourism in the area have to visit most to pray and ask for blessing. Its regular ceremony falls on Buda Wage Merakih according to Balinese traditional calendar. It cycles every 210 days.

According to Kadek Suriadnya, one of the living witness as a hoteliers working in the area said that in the 2006 year, the area turned into a rapidly developing tourist destination. More accommodations and other tourist facilities were built. This was an extension of Kuta and Legian; the main touristic resorts existed earlier, which were already too loaded. To accommodate the increasing numbers of tourist arrivals to the island, Petitenget was the new tourist area development at that time. The rice field function turned to an industry, the tourism industry in particular. The farmers started getting some difficulties to get water at the time especially during dry season. On the other side, some investors rushed into the area and were ready to invest for tourism development. This natural pressure urged the people to grow tourism destination rather than farming. An industrial area indicates that people advance their economy. To which tourism industry harvest season is a lot faster than the farming people had before. Growing tourism was a lot easier than farming at the time. Thus, the land lords started either renting or selling their lands onto investors for the purpose of tourism facility development. Since then, the fast and furious tourism development was very inevitable. Now the area has turned into one of the best tourist resort to enjoy the culinary, beaches, tattoo studios, spa outlets, strolling around and shopping. It helps visitors holiday in the area a lot easier with those pampering facilities. The presence of the Capital Hotel and Resort is to complete the facilities the visitors need to explore the area with Gin Sushi Japanese Restaurant and to experience a truly Indonesian hospitality she offers. She stands out from the noise crowd as an oasis to enable people holidaying in the area to get a better choice to stay in all suite size rooms which are a lot more comfortable. Click www.stayatcapital.com