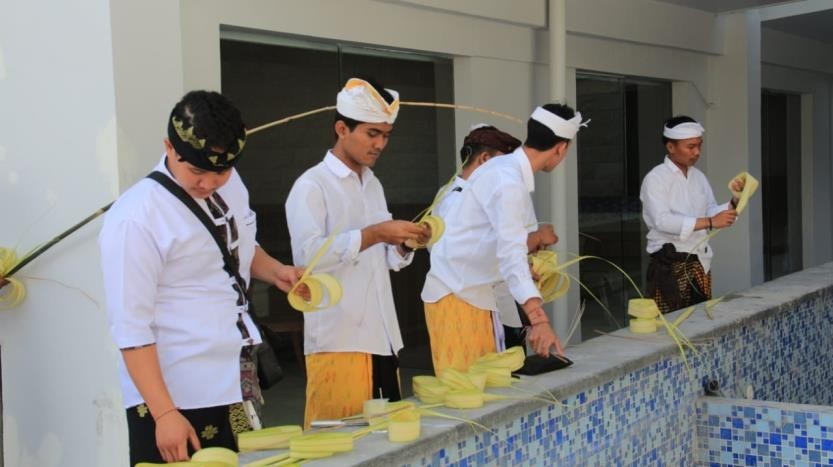 There is a common belief in most religions if not all, whatever their religions are, they believe that negative energy remains in every newly constructed building, no matter of what its function is either for a home living or a business firm. The negative energy potentially sources from the building materials they bring from outside to the building premises, and the workers at what level of mental condition they do their jobs to include anger, depression or disappointment.

We never know how the trees live or are chopped down before they become logs or timbers. This energy is an invisible object but exists. The belief also says that if we do not cleanse, extract, and purify the negative energy, it will affect the process of our living or at doing the business. It could be in the forms of misconduct, unexpected loss or continued weird mistakes that cause us a great potential loss.

On Saturday, 31 August 2019 it was the auspicious day for the Capital Bali Hotel & Resort, a newly constructed building firm, to conduct the Melaspas ceremony. The ceremony was defined as to cleanse, get rid of, purify and bless the new building, the whole building premises, from intangible impurity that is considered as the negative energy. An offering was prepared by the third party. It means that it was prepared by the offering expert. An offering in a bigger scale is so detail in higher complexity.

The expert is the one who understands about it. An offering consists of fruits, coconut leaves woven containers, raw rice, corn shaped-steamed rice, flowers, roasted chicken and a suckling pig. It varies in sizes, colors, shapes. If a single element is missed at the preparation, the ceremony won’t start. The expert readily assists the Priest along the ceremony procession to respond if an element of the ceremony were missed to complete the whole process. The ceremony was led by a Pemangku, a village Priest. The entire team members attended the ceremony, prayed together and were blessed with holy water.

A few holy waters were prepared according to its functions as the cleanser, reliever, and the purifier. A few of them are sourced from the higher Priest, Ida Pedanda of higher caste by paying a visit to his Griya. The term of Griya, a refined Balinese word, refers to a house of a high caste specially Brahmana.

The Rejang dance with Balinese live orchestra, gamelan, was performed by the staff members. The team members ngayah, referring to a social work at this stage. The dance is considered as a holy dance that is only performed at the temple premises, yard. It is only dedicated for religious ceremony not for commercial purpose. The Rejang dance is never performed for commercial purpose. It is one of the requirements to perform the whole ceremony process in order that the ceremony was considered completely done.

The series of the activities were to signify the firm ready to operate. The all team members feel blessed and readily serve our future clients staying with us while holidaying in Bali. Experience the mythical vibe of the island of Paradise Bali.